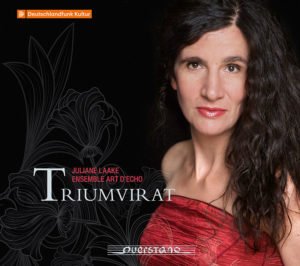 At the end of the 17th century Johann Schenck, August Kühnel and Conrad Höffler were known throughout the musical world as masters of the viola da gamba. Yet these three gambists, active at comparatively small German courts, could not long sustain rivalry with the brilliance of the French “Sun King” and his entourage of court gambists. Juliane Laake now lifts this triumvirate out of the shadow of Versailles and on to a red carpet.

The best of the English gambists’ harmonic audacity, the endlessly ornamented melodies of the Italians and the inimitable elegance of the French all blend here into a “mixed” early European style that demands all the skilful refinement and technical expertise at the disposal of the queen of the stringed instruments. Juliane Laake and her ensemble Art d’Echo create a very special tableau of the refined joie de vivre of courtly life.

Juliane Laake studied viola da gamba at the Hochschule für Künste in Bremen and at the Royal Conservatory in The Hague. She completed her training by attending various master courses with international specialists.

Since winning the Magdeburg International Telemann Competition Juliane Laake has been in demand at the Leipzig Bachfest and numerous renowned early music festivals. She has performed in many venues including Utrecht, Copenhagen, Stockholm, Zurich, Tel Aviv, Buenos Aires and Sydney, and she works regularly with ensembles such as the Lautten Compagney, Weser-Renaissance and the Akademie für Alte Musik Berlin, and with eminent soloists including Hille Perl, Harry van der Kamp and Dorothee Mields and outstanding conductors such as Hans-Christoph Rademann and Pablo Heras-Casado. Her wide-ranging discography speaks for itself.

In her own concert programmes and CDs Juliane Laake, accompanied by her Ensemble Art d’Echo, devote themselves to gamba literature in all its facets, especially works that are less familiar. Her ambitious research activities and her highly virtuosic yet touching performance style are exemplified in numerous world first recordings which have received enthusiastic press reviews.

Several of her CDs have been nominated for the German Record Critics’ Prize and for the International Classical Music Award (ICMA).

Gamba music performed with such a sunny and gleaming quality gives its listeners an instant and heightened awareness of their own existence and enables them to dip into an Arcadian musical landscape far removed from all temporal concerns. As she plays, Juliane Laake, the “grande dame” of the viola da gamba, brings to life all the magic of lost or forgotten musical scores. Dr. I. Waltenberger, online merker, 15.09.2019

Juliane Laake and her ensemble, especially her second gambist Júlia Vetö, bring to life these works from the German high baroque in all their fantastical wealth of invention and emotional variety, with flawlessly beautiful sound. Once one has heard this CD it is irrefutably clear that these baroque affects all derive from the deeply-felt feelings of an individual, common to all humanity yet expressed in new ways in every musical epoch. This effect is not, of course, achieved by exaggeration in the manner of presentation; what makes these interpretations so compelling is precisely the subordination of the performer’s personal emotional responses to an extreme sensitivity to the emotional content of the music. Klassik-heute.com, 15 May 2019