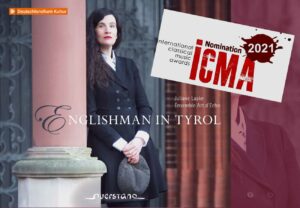 Hardly any viol player was as famous in the mid-17th century as the Innsbruck court musician William Young. Emperors and kings demonstrably showed him their great esteem. He was celebrated as the new Orpheus by his contemporaries and decades after his death he was still considered one of the best viol players Europe had ever had.

And hardly any gambist has been forgotten as thoroughly as William Young, despite his extensive, extraordinary and stylistically extremely diverse Œuvre. This discrepancy alone is reason enough to turn to Young’s work with all attention and devotion. It quickly turns out that Young was a wanderer between worlds and times, that his compositions play with the different musical styles and currents of his time in a refreshingly informal way. The strictly polyphonic Old English consort heritage is mixed with the fresh and still very young Italian sonata ideas with a light hand and absolutely sovereign. Harsh, bold English harmony à la Matthew Locke contrasts with pleasantly pleasing tonal predictability. Bizarre metric structures stand next to downright rough dance motifs – all in all a wonderfully unconventional and still largely uncultivated field of experimentation, a musical world of its own off the beaten track, which can hardly be classified in the usual drawers – this is perhaps one of the reasons for the current ignorance of his work. However, for Juliane Laake and her ensemble Art d’Echo it was pure temptation.

(Subject to be changed!)