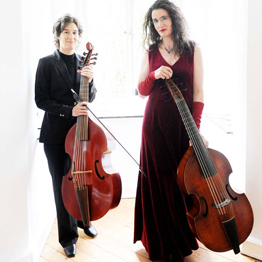 Choice Pieces for two Viols from England and France

“In my opinion the essence of music is nowhere more wonderfully brought together than in the gamba, the most perfect instrument that exists in the world at the present time. – For which reason this worthy instrument should very easily be able to produce music as different and fantastical as the lute.” This was the view expressed in 1607 by Tobias Hume, describing the fashion currently prevailing in the British Isles: the viol was in fact so popular that children received their first music lessons on it, ladies and gentlemen enjoyed it in their leisure hours, and the theatre would have been unthinkable without it.

The virtuosity of a handful of musicians such as the former soldier Tobias Hume brought it such high international renown that the French Sun King’s court was quick to embrace it. Here too the viola da gamba became the queen of instruments, a rank it retained until well into the 18th century.

Not everybody who could hold a bow would necessarily seek the perfumed aura of His Majesty. Monsieur de Sainte Colombe was an example of an artist who had no desire to join the merry-go-round of vanity, and this made him into one of musical history’s great enigmas: neither his first name nor his dates are known. But the numerous duets for viola da gamba that flowed from his pen reveal a spiritual depth that says far more than any biographical statistics – for which reason the English and French styles sit happily alongside each other, however different the results may sound.

In this programme Juliane Laake can be heard performing with Julia Vetö.