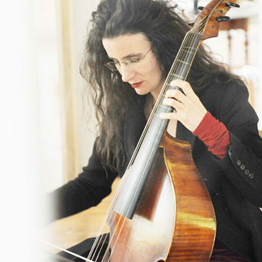 Juliane Laake sets off on a whistle-stop tour of the development history of this unusual instrument, the Viola da Gamba, which originated in Italy around 1500 and soon captivated the European aristocracy. Because it could only be played sitting down (gamba means leg), it was useless for travelling musicians and thus became a favourite with the aristocracy because they ran no risk of their social standing being underestimated.

The programme includes works by the Spaniard Diego Ortiz, the English-born Tobias Hume and Christopher Simpson and the Netherlander Johannes Schenck, and concludes with Sonata IV by Carl Friedrich Abel, the last great exponent of the art of playing the viola da gamba. With him the instrument disappeared from the musical scene until its remarkable renaissance in our own day.