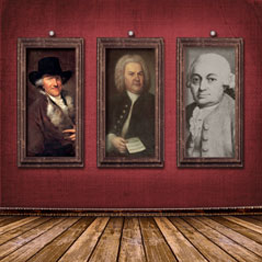 Johann Sebastian Bach with his two sons from his first marriage, who followed his example in two very different ways: On the one hand Carl Philipp Emanuel, long the chamber harpsichordist to the later Prussian king Frederick II, and, for equally long, church music director in Hamburg; on the other hand Wilhelm Friedemann, who tended towards “improper” excesses equally in human, professional and compositional terms. Each was in his own way an original genius, and both get the chance to be heard in this programme, following in the wake of their matchless and unsurpassed master.

Carl Philipp encounters his father in his own highly personal genre of sonatas for viola da gamba, in which he expressed himself in a quite different way at the Prussian court from how his father, later the Cantor at St Thomas’s church, Leipzig, had done while still in Köthen. And the restless Wilhelm Friedemann throws in his commentary from the harpsichord, a commentary that scratches extraordinarily at the surface of what was then in circulation on the market of musical galant fashion. It is no surprise that he, his father’s particular favourite, was forever landing himself unerringly in difficulties.