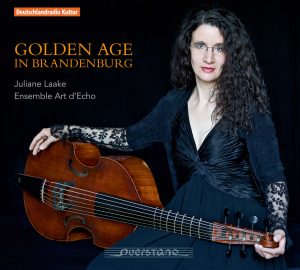 Works by W. Brade, B. Praetorius, N. Zangius and others

Steep yourself in the rarefied atmosphere of private 17th-century devotional music for viola da gamba, voice, lute and organ!

The French Bibliothèque Nationale possesses a very rare 17th-century music manuscript book of works for solo gamba. Purchased in Berlin in 1880, it is thought to be a collection from the Brandenburg region. This tiny volume, 270 pages long, contains a unique treasury of handwritten music of which only very small fragments have ever been published. There are only three or four comparable collections in existence, none of them as comprehensive as this one.

Most of the pieces in it are anonymous, leaving ample room for speculation – who wrote them, and, just as excitingly, for whom?

If we take into account the fact that the Great Elector Friedrich Wilhelm, who was reigning in Brandenburg at the time of the manuscript’s composition, played the gamba himself and had assembled the most eminent gamba players of his day at his court, we realise the significance of this manuscript for the music of that time in that region, still virtually unknown or researched. In this recording the solo works from the gamba book are complemented by works by closely connected contemporaries. This is your chance to experience forgotten music being reawakened!